Hello Friend This is special category for our small reader who study in school. If they looking for english essay for their school homework or any kind of english essay article then this special category might help you all guyz. in this article we will share Kalpana Chawla Essay in English for all classs children and  student . Initially we have published 500 word article for Kalpana Chawla. 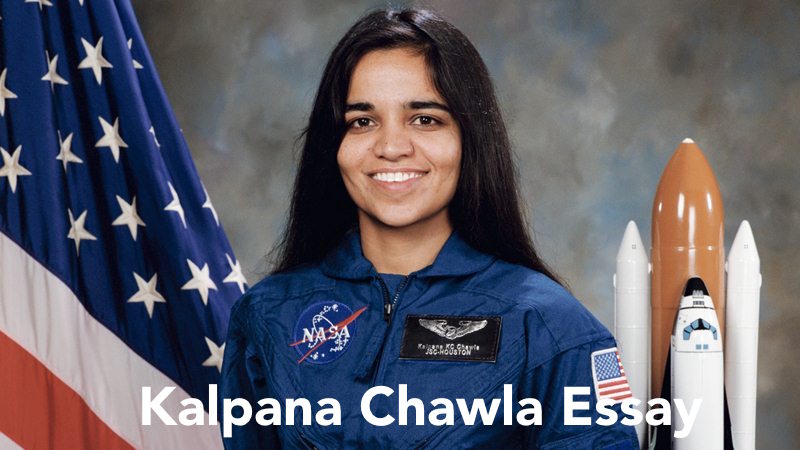 India has contributed to the world’s develop ment and progress as many of her sons and daughters have achieved distinction in the world arena Kalpana Chawla was one of them She was born in Karnal, Haryana on 01 July, 1961 of Banwarilal and Sanjogita. She enjoyed flying aerobatics and tail-wheel airplanes.

She gradu ated from Tagore School, Karnal in 1978 and earned her B.Sc in aeronautical engineering from the Punjab Engineering College at Chandigarh in 1982. She moved to the U.S. for her Master of Science degree in acrospace engineering from the University of Texas in 1984. She also earned her Doctorate of Philosophy in acrospace engineer ing from the University of Colorado in 1988 She started work at NASA Ames Research Center in the area of powered-lift computational fluid dynamics.

Her research concentrated on simu lation of complex air flows encountered around aircraft such as the Harrier in ground-effect.” In 1993, Kalpana Chawla joined Overset Methods Inc, LOs Altos California, as Vice President and Research scientist to form a team with other researchers specialising in simulation of mov ing multiple body problems.

She was selected by the NASA in December, 1994. After completing a year of training and evaluation at the Johnson Space Center, she was assigned as crew representative to work technical issues for the Astronaut Office EVA/ Robotics and Computer Branches.

Kalpana Chawla was assigned in January 1998 as the crew representative for shuttle and sta tion flight crew equipment, and subsequently served as leader for Astronaut Ofices Crew Sys tems and Habitability section.

STS-87 Columbia (November 19 to December 5, 1997) was the fourth US Microgravity Payload flight which focussed on experiments designed to study how the weightless environment of space affects various physical processes, and on observations of the Suns outer atmospheric layers. It made 252 orbits of the Earthtravelling 6.5 million miles in 376 hours and 34 minutes Her next space experience was in the STS-107 Columbia (January 16 to February 1, 2003 ) which was a 16-day flight dedicated to science and research mission.

Even in her death, we have a lesson as a promis ing astronaut was lost with other crew mem bers. She is no more with us today, but the path she has shown has opened up new vistas in the space exploration.