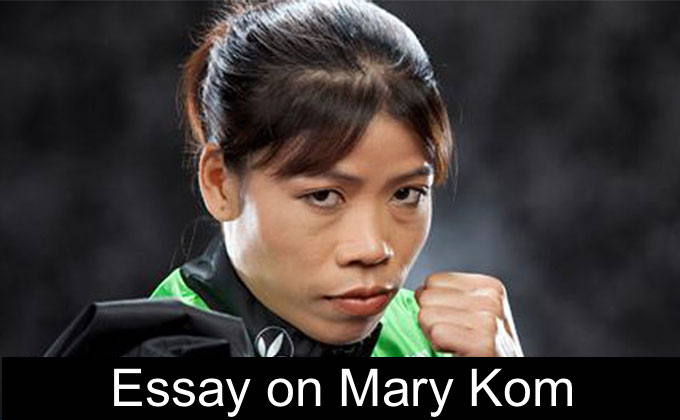 Essay on Mary Kom in English

India is on a continuous spree to set new heights for its  performance in the world sports. One woman, who has been able to take the limelight in the acutely male dominated sport sector is Mary Kom. Mary Kom, has not only got the recognition for herself but also for the sport boxing in the cricket crazy country India. India’s Mary Kom is ranked 4 in the AIBA World Women’s Ranking Flyweight category. Mangte Chungneijang Mary Kom also known as MC Mary Kom, or simply Mary Kom, is a five-time World Amateur Boxing Champion. She is the only woman boxer to have won a medal in each one of the six world championships.

Mary Kom was born on 1 March, 1983, in a small village of Manipur to a poor tribal family. Mary always dreamt of becoming a good athlete and also took to sports to provide financial support to her family. Although she had a keen interest in athletics from childhood, it was the success of Dingko Singh that inspired her to become a boxer in 2000. She started her training under the close eye of M Narjit Singh, Manipur State Boxing Coach at Imphal. Mary started boxing in 2000 and emerged as a quick learner.

She preferred to put through the same paces as the boys around her. In just 2 weeks, she learnt all the basics and even when her parents didn’t like her winning the state boxing championship, she continued her career in boxing. After the first match at the state level sub-junior boxing championship in 2000, she was believed as the best boxer.That proved as a realisation when she uttered to herself-“That’s when I learnt that God has gifted me with this talent.”

Within a year of boxing, Mary made her international debut at the age of 18at first Women World Boxing Championship held at Pennsylvania, USA. In her debut itself, she won a silver medal of 46 kg weight and later won the gold medal at the second ARC Internationale de Boxe Amateur (AIBA) World Women’s Senior Boxing Championship held at Turkey. And since then, success followed on its own.

Nicknamed ‘Magnificent Mary’, she is the only Indian woman boxer to have qualified for the 2012 Summer Olympics, where she won the bronze medal. Following her victory, Manipur Government decided to award ₹ 50 lakhs and two acres of land to her. She also received gifts from several other bodies. After her success in the Olympics, she made a stir in the hearts of several Indians, giving motivation and inspiration to work hard.

For her courageous effort she has received Arjuna Award (2003), Rajiv Gandhi Khel Award (2009), Padma Shree (2010), Padma Bhushan (2013). She has also been honoured with International Boxing Association Ambassador for Women’s Boxing in 2009.

Kom co-wrote an auto-biography called Unbreakable (2013) which is about her difficult childhood, the challenges she faced on the way to success and the joy of winning. It was also translated into a movie called Mary Kom. The movie proved a big hit and people were really moved with the journey of Kom’s struggle. On 1October, 2014, she won her first Gold Medal at the 2014 Asian Games. The medal is also the first Gold for any Indian woman at Asian Games. To encourage the young aspirants to indulge in sports, Mary runs a small charitable institute in her hometown to teach boxing for free.

Mary attained heights in her sport despite being a mother to three kids. She prepared herself to be oblivious to her social duties and to focus only on her training. Mary Kom successfully overcame gender bias, poverty, the limitations of her small size, and the disadvantages of the small region to win the Olympic medal for boxing. She is an inspiration not only for the North-Eastern people but also for women who endure hardships on a daily basis. As a sportswoman, she made India proud with her glorious achievements. Her indomitable spirit makes her an exemplary figure for others.