Hello Friend This is special category for our small reader who study in school. If they looking for english essay for their school homework or any kind of english essay article then this special category might help you all guyz. in this article we will share AIDS Essay in English for all class children and student . Initially we have published 600 word article for AIDS. 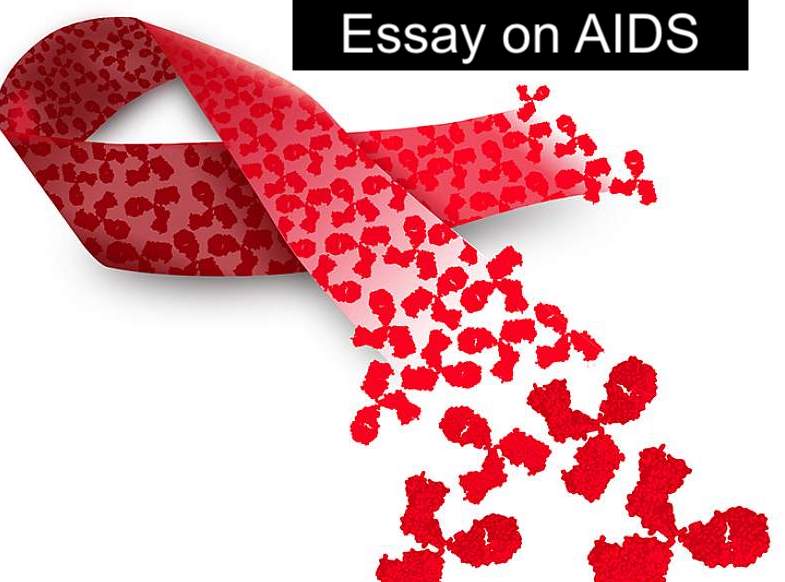 Essay on aids in english

Many people are dying of AIDS each 1, and more are Contracting it every minute. AIDS and more disease is a sentence of slow but inevitable death. 11 date, there is no cure for this disease, however there are drugs which help to slow down the growth of this disease in the body,

AIDS is spread when the HIV virus enters the body, it gets into the white blood cells and takes over the reproductive system of that cell to reproduce itself thereby, damaging the white blood cells and weakening the immune system of the body. Slowly, the immune system breaks down making the body susceptible to many diseases ultimately resulting in the death of the infected person. Despite mass Scale awareness programmes, there still exist some myths regarding the contraction of HIV.

HIV is a transferrable virus, i.e. it can flow from one person to affect the other through some liquid. The presence of liquids or body fluids is a pre-requisite for HIV to be transferred. The virus can be found in the blood, semen, vaginal fluid and breast milk of the infected people and is also found in the saliva, sweat and tears, though not in high amounts to transmit the virus to another person.

HIV can spread through any type of unprotected sexual contact When one of the partners has the virus. Sharing of needles, Syringes, etc. to inject drugs is another way of how HIV can be transmitted. sharing of needles for tattoos, piercings and body art can also lead to infection. Also, newborn babies are at risk of getting the HIV  Virus from their mothers if the mothers are infected. This can happen before the baby is born, during birth or through breast feeding. However, HIV does not spread by shaking hands, sitting together or sharing food, etc.

In the words of Elizabeth Taylor: “It is bad enough that people are  dying of AIDS, but no one should die of ignorance”. HTV can be prevented when some precautionary measures are followed. It is  always recommended to practice safe sex using Condoms and other  precautionary measures to inhibit the virus from being transmitted, Similarly, use of fresh or” sterilised needles doesn’t allow the virus  from spreading. Also, expecting mothers should be tested for HIV because infected mothers who receive treatment are less likely to spread the virus to their babies than those who do not. The initial Symptoms that HIV patients exhibit are diarrhoea, fever, weight loss, belly cramps, joint pains and skin rashes.

1st of December every year is observed as World AIDS Day. There are various organisations and bodies world over that promote awareness about this serious disease. The International AIDS Society that works with a vision to end the HIV epidemic, concluded its last Conference in Melbourne, Australia in July 2014.

Thus, that was all about AIDS and HIV. It calls for all of us to shun all the myths related to this dreaded disease AIDS and take steps to prevent its spreading by addressing to its actual causes which are stated above. At the same time, we should put an end to this discriminatory behaviour meted out to the victims and mingle wit them without any apprehensions.

essay on aids in english

We know that now AIDS is spreading like wild fire throughout the world. India is particularly affected by the disease as there is in India the even- increasing number of HIV positive cases as is clear from a report also:

it is well-established that STD (Sexually Transmitted Disease) is a major health problem in India which has been further compounded with the emergence of HIV infection, The dramatic increase of HIV positive Cases in India has, however, limited modes of transmission and majority of the cases can be attributed to Sexual activity, parenteral transmission, through receipt of infected blood and infected •needles.” Thus, We know there are the following modes of spreading of AIDS:

1. Promiscuous extra-marital sexual activity without ample Precautionary measures such as the use of a Condom.

3. Use of infected needles usually non-disposable ones.

4. Heredity – when both or either of the parents is infected. The disease does not spread by shaking hands, sitting close to an infected person, use of same towels and clothes, kissing etc. – Since there is so far no effective remedy for AIDS, adequate precautionary measures are indispensable.

1. Abstention from having sex with anybody other than one’s own spouse. If at all one is inclined to have an extra-marital or promiscuous sex, adequate precautionary measures, such as the use of a condom, must be taken.

2. Only sterilizes disposable needles should be used for blood test purposes or transfusion of blood.

3. Blood before being transfused, must be tested for HIV positive.

4. If one or both of the spouses are suffering from AIDS or have  HIV positive blood, the production of a child should be avoid Proper family planning measures should be adopted to prevents a birth,

If a person does suffer from AIDS or has HiV positive blood should not hate him or her. We should remember that AIDS contagious disease. Hence we should not desert such a patient but show hint or her love and give him/her encouragement to bear the trouble boldly and patiently Since We know the disease is a hundred percent fatal one as the whole immune System of the body is destroyed.

Although several companies are engaged in research and even claim some success, yet at present no Worthwhile remedy is there.

Fortunately, more recently, we are in receipt of more encouraging is regarding the manufacture of an AIDS vaccine in the near future which may mitigate the lamentable situation as we find ourselves in at present. Let us hope for the best. Still, it must be remembered. Precaution is the best remedy.

“Youngsters are the most vulnerable group which are failing prey to the acquired immune deficiency syndrome (AIDS) and cur aim is to create awareness among them about the deadly stalker and help them make the right decisions,” said Dr. Erma W. Manonocurt Deputy Director (Programmes), UNICEF, sometime ago

while participating, in inter-industries symposium on “HIV/AIDS drugs-free workplace: a key to women health and social equity.

“We are concerned that an increasing number of youngsters falling victim to the deadly disease and there are examples where large Percentage of the youngsters, especially in developing countries, are HIV positive. This is a cause of great concern to not only to any country but our global society as a whole” , she added.