Hello Friend ,This is special category for our small reader who study in school. If they looking for english essay for their school homework or any kind of english essay article then this special category might help you all guyz. in this article we will share Non-Conventional Sources of Energy in English for children and student . Initially we have published 500 word article for Non-Conventional Sources of Energy. 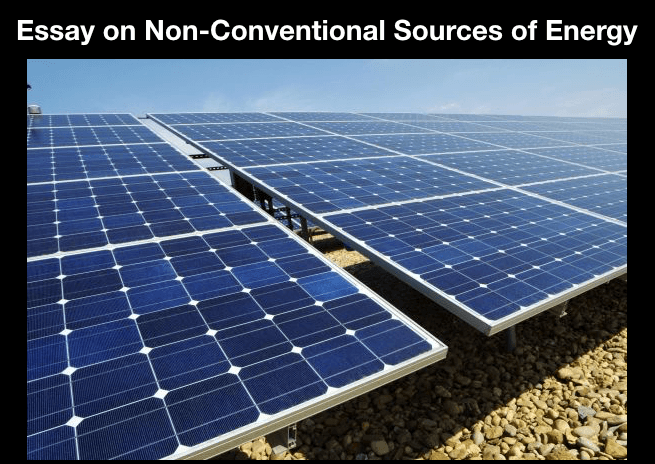 Moreover, they do not require heavy expenditure. Interestingly, the application of tidal energy and wind energy was operational in the form of energy sources long back when mineral oil, coal and natural gas were not broadly introduced as conventional sources of energy. In the beginning, even windmills were utilised for taking out water and pounding grains. Running water and wind were applied for finding direction or navigation. Now they have developed into important energy sources.

The popularly used non-conventional sources of energy in India are :

In order to produce electric power from tidal energy, dams are built close to estuaries to make use of inward and outward water currents and surges. The Gulf of Kutch is best suited for generation of electric power from tall and powerful tides moving into small brooks.

Wind power is harnessed by setting up a windmill which is used for pumping water, grinding grain and generating electricity. In India, states like Tamil Nadu, Gujarat, Odisha and Maharashtra are regarded as superior areas with respect to this type of energy. Places with rapid and regular wind flows are appropriate for this kind of power generation. Other than windmills, wind farms are also there.

Sun is.the source of all energy on Earth. Sun is the most abundant, inexhaustible and universal source of energy. India is blessed with plenty of solar energy. India has developed technology to use solar energy for cooking, water heating, water dissimilation, space heating, crop drying, etc. Gandhinagar solar plant, Thyagaraj stadium plant etc are some of the biggest solar power plants of the country..

Biomass refers to all plant material and animal excreta as an energy source. Some important kinds of biomass are inferior wood, urban waste, farm animal and human waste. India thrives heavily on energy from biomass and disposables. Gobar Gas plants have been built in many rural areas to make them self-reliant.

It is the thermal energy generated and stored in the Earth. From hot springs used for bathing and space heating, geothermal energy has been used since ancient times, but it is now better known for electricity generation. Worldwide geothermal power is cost effective, reliable, sustainable and environment friendly. Geothermal power can help reduce global warming, if widely used in place of fossil fuels.

Thus, above described are the most widely used non-conventional sources of energy in India. The nation is not affluent in thermal energy resource-hot springs. However, efforts are on for the total exploitation of Manikaran thermal springs in Himachal Pradesh.

The benefits derived from non-conventional sources of energy are immense. These are renewable resources that can be renewed with minimum effort and money. Such energy is pollution free and eco-friendly. The use and generation of non-conventional energy has grown by leaps and bounds in the last two decades. The non-conventional energy potential is 95,000 MW and the Centre is leaving no stone unturned in making the maximum use of this energy.