Hello Friend ,This is special category for our small reader who study in school. If they looking for english essay for their school homework or any kind of english essay article then this special category might help you all guyz. in this article we will share FM and radio in English for children and student . Initially we have published 500 word article for FM and radio 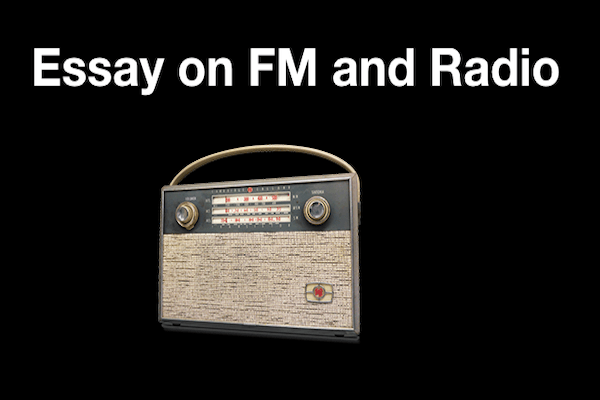 short essay on fm and radio

Today’s grandfathers are remembered tuning into their giant radio sets to listen to their hourly news bulletins of Akashvani or BBC world service. A portable radio set or a transistor was much synonymous to the mobile phones now.

For years, since the inception of radio services in India in 1927, Akashvani remained the official broadcaster. People across the country were exposed to ageless voices of presenters like Ameen Sayani and a mix of news, film songs and comedy shows they grew to love.

Today, like in other countries, Indians too, rely on a combination of radio, television movies and internet. FM radio stations are one of the most popular media offering millions of Indians a great mix of shows. FM radio was first introduced by All India Radio in 1972 at Madras and later in 1992 at Jalandhar.

FM was then sold to private players in three phases. In phase I, FM was thrown open for private players in Chennai, Delhi, Mumbai, Kolkata and Goa, before being opened for Bengaluru, Hyderabad, Jaipur and Lucknow. Regulatory norms prohibited the broadcast of news and other non music programmes. Hence, the content was all about music and movies. In 2005, during phase II of its development, 338 frequencies were offered, of which 237 were sold. FM spread through the country with local players. However, content still had to be music. Unlike print and television media, FM has managed to say afloat and survive only via music as its main content.

The challenge of and hardships from content regulation were battled effectively by private players who included movie promotions, parodies, fun-filled shows and lively anchors to work in the given content requirement.

Inspite of every challenge faced, the FM industry pushed itself to the limits to survive against all odds. It has revolutionised the simple radio of the yesteryears and added more entertainment to it. It is expected that the much awaited phase III licensing shall bring an exponential growth to the radio industry.