Essay on Our Metro 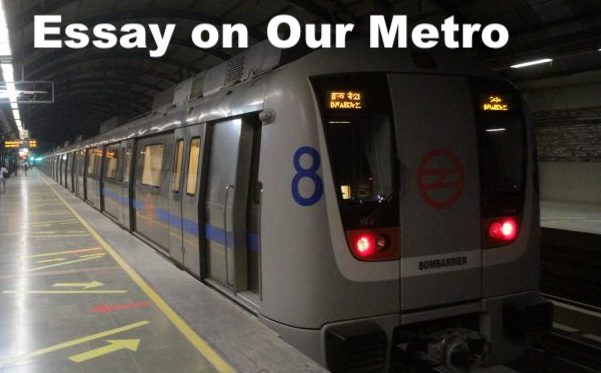 Delhi Metro is indeed a wonderous creation. Since the first Delhi metro beginning December 2002, its operations have expanded multifold, making life easier in Delhi for lakhs of people. Presently, the Delhi Metro network consists of about 193 operational kilometers with 140 stations along with six more stations of the Airport Express Links. The network has now crossed the boundaries of Delhi to reach Noida in Uttar Pradesh and Gurgaon in Haryana. Unquestionably, our metro is at par with the sky-rails of all the other developed and advanced countries.

The Delhi Metro Railway Corporation, conceived and delivered, in our metro, a hassle-free and convenient transportation at a reasonable price in Delhi and NCR. The average daily ridership of metro is about 19 lakhs. Not only has it connected different districts of the city for the movement of people but, has also considerably lessened the traffic on the roads. The Delhi metro has replaced a little over than one lakh vehicles on the roads thereby reducing traffic and pollution

The world class facilities like air conditioned coaches, automatic doors, flap over entry and exit gates at the station, have made it a rider’s delight. The greatest achievement for the metro came in 2010 when the Delhi Metro became the first intra-city rail network to have a separate coach reserved for ladies. Today, we also have automatic token vending machines.

The metro staff is very courteous and helpful. Wheelchairs and human assistance are also provided to the elderly and the physically challenged. The metro stations have elevators, escalators and stairs. The Delhi metro has also contributed tremendously to the environmental front by becoming the first ever railway project in the world to claim carbon credits for regenerative braking. It has also set up rooftop solar power plant at the Dwarka Sector 21 metro station, which produces 500 kw power.

The success of the Delhi Metro was re-modelled in Airport Express, which is meant mainly for travellers coming/going from/to the International Airport. Undoubtedly, Delhi Metro has made travelling in Delhi, much easier and comfortable. Things shall improve further when the phase III of construction is completed.