Hello Friend This is special category for our small reader who study in school. If they looking for english essay for their school homework or any kind of english essay article then this special category might help you all guyz. in this article we will share Green Revolution essay for all class children and  student . Initially we have published 300 word and 1000 word article for essay on Green Revolution. 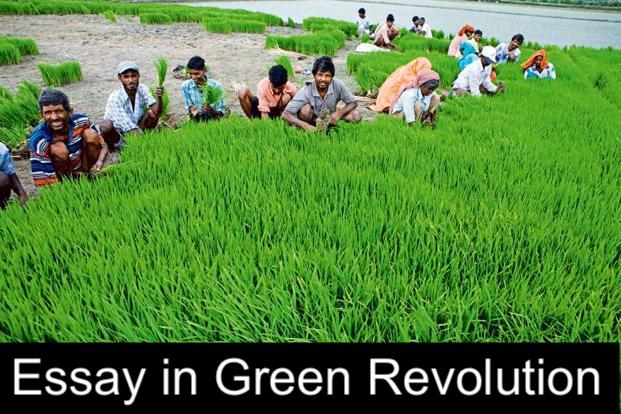 Revolution can be described as the spectacular increase in agricultural production through the use of high-yield seeds, pesticides and artificial fertilisers, After proving very successful in Mexico, Taiwan and the countries of South and South-East Asia, this new agricultural strategy was put into practice for the first time in India in the Kharif season of 1966. Termed as High Yielding Varieties Programme (HYVP) it was introduced in the form of a package programme since it depends crucially on regular and adequate irrigation, fertilisers, high yielding varieties of seeds, insecticides and pesticides.

In 1961, India was on the brink of mass famine. A team of experts sponsored by the Ford Foundation was invited by C.Subramaniam-the then, adviser to Indian minister of agriculture, in the Second Five Year Plan to suggest ways and means to increase agricultural production and productivity in the country.

M.S. Swaminathan, an Indian geneticist used his skills in genetic engineering to herald the programme and is also called the Father of Green Revolution in India.

The HYVP was implemented in the country through three basic techniques. The first was continued expansion of the farming area. Second was double-cropping.

It was the primary feature of HYVP. The earlier one-crop season practice was based on the fact that there in only one natural monsoon per year, so to had two crops a season, there was a need for artificial monsoon or irrigation. The third and the last technique was using high yielding seeds.

All these techniques brought a revolution in agricultural practice and yield. There was a record grain output of 131 million tonnes in 1978-79. This established India as one of the world’s biggest agricultural producers.

No other country in the world which attempted the Green Revolution recorded such level of success. India also became an exporter of food grains around that time. Yield per unit of farmland improved by more than 30% between 1947 and 1979when HYVP was considered to have delivered its merits. The production of wheat especially, grew rapidly and India was able to meet its wheat demand internally and maintain its buffer stock at the same time.

The Green Revolution immensely benefitted India economically. The use of more fertilisers and pesticides spurred the growth of local manufacturing sector. The increase in irrigation created the need for new dams to harness monsoon water. The water stored was used to create hydro-electric power.

This in turn boosted industrial growth, created jobs and improved the quality of life of people in villages. This also resulted in increase in the country’s GDP. Thus, the regions where Green Revolution took place that is Punjab, Haryana, and Eastern Uttar Pradesh, gained tremendously.

Efforts are being made to spread the technology to other parts of the country so that they can also reap the fruits of this technological blessing and the farmers from all over the country can prosper.