Hello Friend ,This is special category for our small reader who study in school. If they looking for english essay for their school homework or any kind of english essay article then this special category might help you all guyz. in this article we will share United Nations Organisation in English for children and student . Initially we have published 500 word article for United Nations Organisation. 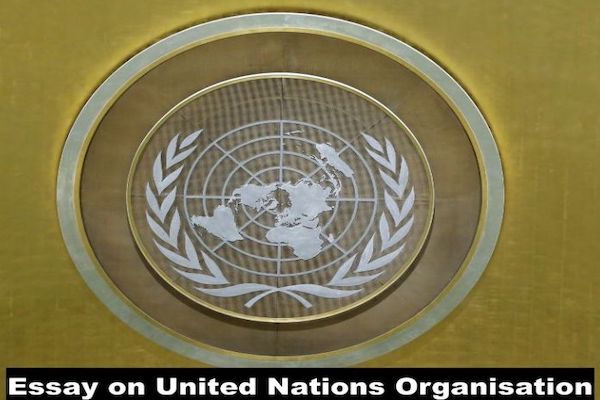 United Nations Organisation (UNO) is an international organisation founded in 1945 after the Second World War, by 51 countries committed to promote international cooperation. Following the ineffectiveness of the League of Nations in preventing the Second World War, the need for an agency to act as a successor to the former organisation was felt. Hence, the United Nations Charter was drafted at a conference in April-June 1945. This charter came into effect on 24 October 1945 and the UN began its operations.

The general purpose of the United Nations was in homogeneity with that of the League of Nations. Its structure and functions too, are in  congruity with its predecessor. Same goes with its principal organs and related agencies. However, in some respects, the UN constituted a very different organisation, especially with regard to its objective of maintaining international peace and security and its commitment to economic and social development.

Besides maintaining peace and security, the ambit of the organisation includes other important objectives like developing friendly relations among countries based on respect for the principles of equal rights and self-determination of people achieving worldwide cooperation to solve international economic, social, cultural and humanitarian problems; respecting and promoting human rights; and serving as a centre where countries can coordinate their actions and activities towards these various ends. The UN’s mission to preserve world peace did complicate during the Cold War.

However, after the end of Cold War, the UN took on major military and peacekeeping missions across the world with varying degrees of success. Also, it garnered more members and witnessed immense growth during that time.

In order to get its member states to cooperate most efficiently, the UN is divided into five branches, namely, the UN General Assembly, the UN Security Council, the UN International Court of Justice, the Economic and Social Council and lastly, the Secretariat. Today, the UN has 193 member nations. Though, the UN does not maintain its own military, it does have peacekeeping forces provided by its member states.

On approval of the UN Security Council, these peacekeepers are sent to regions of conflicts. In 1988, the peacekeeping force won a Nobel Peace Prize for its actions. The UN also safeguards human rights of the citizens and extends humanitarian assistance and cooperation whenever needed, say in case of famines, wars and natural disasters.

Lastly, the UN aids significantly in social and economic development through its UN Development Programme. The World Health Organisation, UNAIDS, the UN Population Fund and the World Bank, to name a few, play an essential role in promoting health and fighting various health ailments in the developing countries. Also, the UN publishes the Human Development Index to rank countries in terms of poverty, literacy, education and life expectancy.

For the future, the UN has established a set of goals that it calls its Millennium Development Goals related to reducing poverty, child mortality fighting diseases and epidemics and developing global partnership in terms of international development by 2015. It is to be seen that whether the past success story of the UN will be replicated in the future too.