Hello Friend This is special category for our small reader who study in school. If they looking for english essay for their school homework or any kind of english essay article then this special category might help you all guyz. in this article we will share Essay on secret of happiness in English for children and student . Initially we have published 1000 word article on secret of happiness 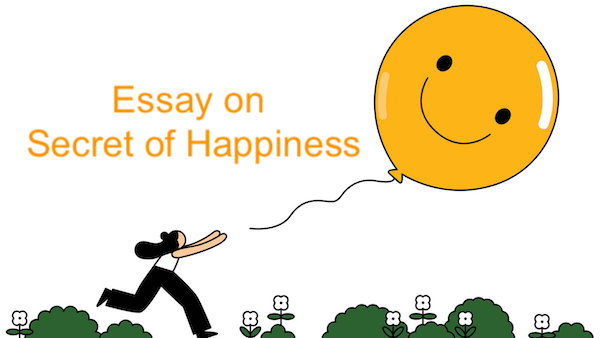 It is a common belief, and it is right in itself, that happiness is a state of mind, and that it has nothing to do with one’s possessions, physical charms and even intellectual attainments. Many poets and philosophers in ancient and medieval times considered life and this world a vale of sorrow. Even the Buddha is said to have stated that the world is a home of sorrows and miseries, Many romantic poets of of England regarded this world as a valley where sorrow and nothing else rules. John Keats, perhaps the greatest among the romantic poets said about this world: “Where but to think is to be full of sorrow.” Even P. B. Shelley, sometimes considered an optimistic and revolutionary poet, said in his celebrated poem:

Ode to the Skylark:
“We look before and after,
And pine for what is not,
Our sincerest laughter,
With some pain is fraught,

Our sweetest songs are those that tell of saddest thought.” Thus, unfortunately, man cannot find free happiness even in laughing and singing. Surprisingly, man cannot enjoy even the sweetest music until sadness is mixed in it. Antonio, the real merchant of Venice in Shakespeare’s drama “The Merchant of Venice,” has the most characteristic quality of sadness which further lands him in a state of utter misery which in the modern context may be called a “catch-22” situation.

We must remember that when the Buddha calls the world “A home of misery,” he also tells us the solution to get out of this state of misery. According to him, the fundamental reason for man’s misery

is his endless desire. One can get rid of misery by giving up this desire for possessing more and more materialistic things. The Buddha advises us to follow what is called “The Middle Path.” In other words, the extreme desire for anything is the basic cause of misery, The Buddha further advises us to follow what is known as “the eight fold path” which comprises eight truths, such as true living, true thinking, true knowledge, true word, etc. We should bear in mind that the Buddha is the most rational among the philosophers and he considers ignorance a sin and hence the cause of misery. Hence, it is our duty to attain knowledge and increase the stock of learning that we have.

Admittedly, contentment is a great source of happiness. Alexander Pope, the famous Augustan poet, says in his “Ode on Solitude”: “Happy the man whose wish and care A few paternal acres bound.”

In the modern world of sick hurry, we often forget to relax. Relaxation, both physical and mental, is essential to give rest to our tired nerves. Instead of taking sleeping pills at night or pushing ourselves to heart attacks and paralysis and strokes, we should just learn how to meditate and relax for a few minutes daily. According to a survey, happiness cannot be the monopoly of the well-to-do or the high and the mighty. Even a poor man can find happiness in certain things. It is often seen that the labourers toiling in the sun and the housemaids doing menial jobs go on singing while they are busy in their boring chores.

Hence, Wordsworth, the renowned English poet says about a Highland lass in his famous poem:

“The Solitary Reaper”
“Behold her ! single in the fold,
Yon solitary Highland lass,
Alone she sings and cuts the grain
And sings a melancholy strain.”
Incidentally, the poet also tells about the power of music in the same poem:
“I listened motionless and still
And as I mounted up the hill,
The music in my heart I bore,
Long after it was heard no more.”

There is no denying the fact that to improve the quality of life and even to exist, we need money and some minimum material possessions. An unsound man or a a recluse has no value in the modern world In order to earn some money and get other basic necessities, one has to work. Work in itself is a source of happiness. The thing that makes us sorrowful is our attempt at over-reaching ourselves. We should have the right means to achieve the right ends. We should not be afraid to maintain the dignity of labour. We should remember: “Work is worship.”

In order to be happy in the real sense, we should train our mind to turn away from the unpleasant thoughts and move towards sweetness. We should learn the value of leisure and pursue some good hobbies to keep our mind busy in healthy and entertaining pursuits instead of just being over whelwed by gloomy thoughts and baseless for bodings. We should follow the path of truth, righteousness and sincerity to maintain peace of mind and give up such negative qualities as anger, desire, vanity, avarice, attachment, sloth, etc. Above all, tension should be avoided. Let sweetness in thought, temper and talk become our habit. Then happiness will pursue us rather than the other way about A writer thus expresses his views on the attainment of happiness while laying stress on the “Middle state”:

“Middle state is the most suited to happiness, not exposed to miseries and hardships, the labour and sufferings of the lower part of mankind; nor embarrassed with the pride, luxury, ambition and envy of the upper part of mankind… The calamities of life are shared among the rich and poor, but the middle station has the fewest disasters, and is not exposed to so many vicissitudes….”

Swami Ram Tirath, the renowned spiritualist of India, considered self-sacrifice and self effacement (for the good of others), the greatest sort of happiness. He gave the example of a lamp in one of his famous lectures at the Tokyo University, Japan. He said that the lamp is able to spread the light only by getting its wick burnt. Similarly, a man can get enlightenment and happiness by being useful to others through selfless work and sacrifice. Bacon says that one can find joy in doing free service to others.