Hello Friend This is special category for our small reader who study in school. If they looking for english essay for their school homework or any kind of english essay article then this special category might help you all guyz. in this article we will share Bullet Train in india Essay in English for all class children and student . Initially we have published 600 word article for Bullet Train in india. 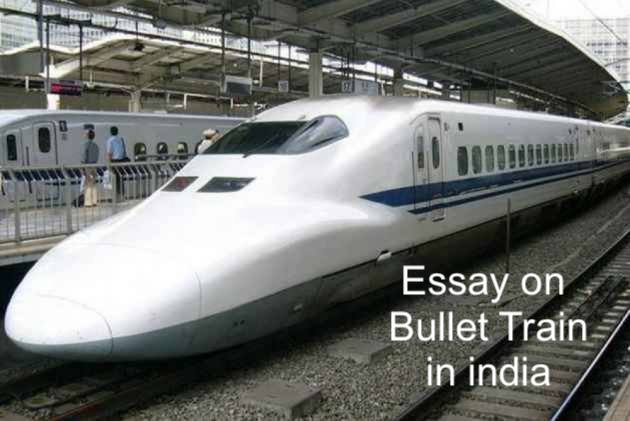 Essay on Bullet Train in india

India has one of the World’s largest railway networks. The number of lives that depend on railways is truly very large. It is the lifeline of this Country. But it is a worrisome thought that this lifeline is ageing fast. Hence, when it was announced by the new Railway Minister, Mr DV Sadananda Gowda that India would also be getting bullet trains like most of the developed nations, there was applause from all sections of the society.

Technology and financing are no longer real constraints in bringing high speed trains to India. India’s first bullet train is proposed along the Ahmedabad-Mumbai stretch. It has 11 stations on the route and is a 534 kilometre long link.

The construction of the high speed railway line is expected to take ten years to complete. The estimated Cost of the project is between  50,000 to 60,000 Crores. The line is expected to be built with elevated tracks along the existing rail route. The major stations along the high speed line will include Surat, Bharuch and Vadodara. The travel time between Mumbai and Ahmedabad shall be reduced to less than two hours as compared to the current express journey time of more than six hours between the two cities.

Apart from the Mumbai-Ahmedabad link, the other proposed links for the new bullet train services include Delhi-Agra, Delhi-Chandigarh, Mysore-Bangalore-Chennai, Mumbai-Goa and Hyderabad-Secunderabad. Prime Minister Narendra Modi also cherishes a dream of Diamond Quadrilateral, which aims to connect the four metros of the countries with high speed trains.

The trains on those routes will have a speed of about 160-200 km per hour..Japan has also offered assistance to India in its endeavour to introduce bullet trains in the country. Thus, the project shall a strengthen diplomatic ties between the two countries.

However, some apprehensions regarding the project haunt the policymakers. The main concern is that will the Common man be able to afford this ride, Considering the huge sums of money invested in establishing it. Secondly, the uncertain economic । returns from the project also give force to critics.

Nonetheless, the Centre and authorities seem optimistic about the project and are leaving no stone unturned in having it implemented.