Hello Friend This is special category for our small reader who study in school. If they looking for english essay for their school homework or any kind of english essay article then this special category might help you all guyz. in this article we will share  essay on Essay on Telangana for all class children and  student . Initially we have published 500 word article for Telangana in English. 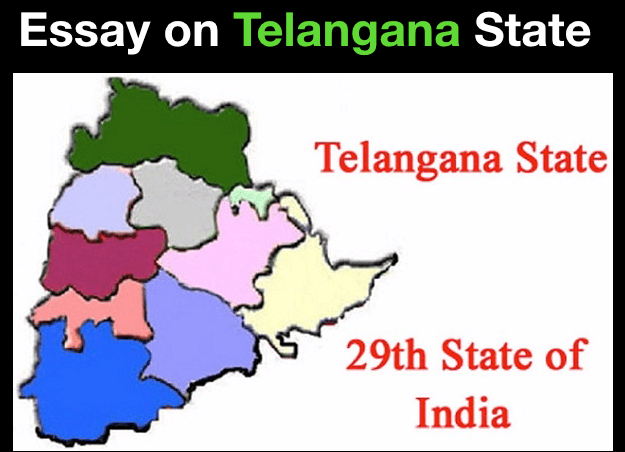 Midnight celebrations on Sunday, 2 June 2014 heralded the birth of Telangana, the 29th state of India in the Southern region of the country. Its emergence was nothing less than an ordeal for those who had been demanding the separate state of Telangana for about six  decades.

Even on the day, the creation of the state was to be decided by the Indian Parliament, lawmakers used pepper-spray inside the building, uprooted microphones and entered into brawls in order to prevent a single bill from passing. Yet despite the chaos, both the houses of the Parliament approved legislation which carved out Telangana from the state of Andhra Pradesh.

On 1 November, 1956, the then state of Telangana was merged with Andhra state to form Andhra Pradesh. The demand of the people of this region for a separate state was not a new development. It was voiced much before the formation of Andhra Pradesh and Continued to be raised even thereafter. The reason for the opposition of the people of Telangana to join Andhra state was the fear of neglect and injustice in the enlarged state.

Even the then Prime Minister of India, Jawahar Lal Nehru was not in favour of the merger and termed it as “tint of expansionist imperialism.” The major reason for the rift and the demand for the state have been perpetual since the formation of Andhra Pradesh.

The fear of neglect was indeed true. The major issues that seemed to be at the centre of the contention between the two regions of Andhra Pradesh were the future of Hyderabad, little development of the area and the repercussions in terms of the sharing of river waters from the completed and planned irrigation projects after the division of the state. Sadly, no political party addressed the issues comprehensively.

In 1969, the Telangana movement erupted with its first ever flames and immensely intensified under the leadership of Marri Chenna Reddy and the Telangana Praja Samithi. Over 350people lost their lives as they were killed in the police firing and lathicharge. The movement was neutralised as Marri Chenna Reddy merged his party with Congress and was made the Chief Minister of Andhra Pradesh.

Many negotiations followed over the years and the people of Telangana kept crying of the injustices done to them on many fronts, mainly regarding development and job opportunities. Then Kalvakuntla Chandrasekhar Rao launched Telangana Rashtra Samiti on 27 April 2001. TRS started gradually building the movement for a separate state.

On 2nd June 2014, the state of Telangana was officially announced and formed KC Rao was elected as its first Chief Minister, following elections in which Telangana Rashtra Samiti secured majority. For a period of ten years, Hyderabad shall remain the joint capital of both Telangana and Andhra Pradesh.

As the clock struck midnight, Jaya Jayahe Telanganga Janani Jaya kethanam‘, which would be the official song of Telangana state, was played on loudspeakers. It was a joyous occasion for those who were a part of the Telangana movement. Many said that there was no need to bifurcate the state as both the new states were Telugu speaking and smaller states were detrimental to India’s progress. However, it is also true that there are many Hindi speaking states and many others that are much smaller than Telangana. Such critical voices can only be muted if the new party keeps its promise and Telangana state shows signs of development and change.