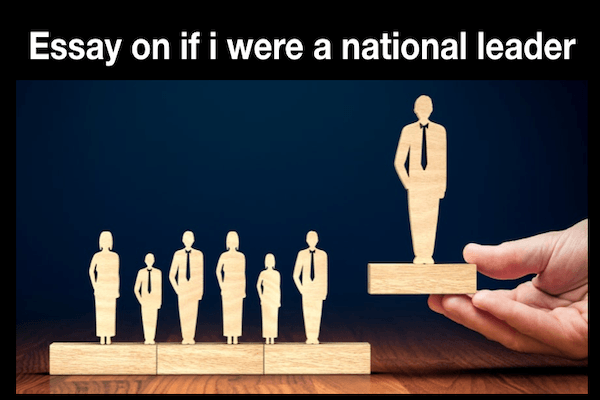 If I Were a National Leader in English

the Father of the Nation ‘Mahatma Gandhi‘ has rightly said “Man becomes great exactly in the degree in which he works for the welfare of his fellowmen”. A national leader is someone who devotes himself completely to the service of the nation and its citizens. It is not this position that honours the person but the person who honours the position. If I were a national leader, I would work tirelessly towards nation development. First of all, I would lay emphasis on rural development because that is where the real India lives. I would build hospitals and schools there.

Apart from creating employment, this would also check immigration from backward states to metropolitan cities and help keep the population of cities in check. I would implement strict cleanliness rules with strict punishments for littering on roads or casing oneself on the roadside. Next, I would work towards the safety of women in the country. As our country is one of the most woman unfriendly nations in the world, women safety is a concern of prime importance. I would deploy policemen and policewomen at night at public places to make it easier for women travelling alone at night. At the same time, any crime against women, be it domestic violence, rape, etc would be dealt with sternly and quickly.

Punishment acts as the biggest deterrents against crimes and since, our country is loose and lenient on timely and strict punishment, criminals get away easily with their misdeeds. I would speed up the judicial process for such crimes. Social malpractices like seeking dowry would be punished severely and with no mercy towards the culprits.

Unfortunately, today a being national leader has been reduced to a money making business where leaders are just concerned with building their own heaps of gold and misuse the power reposed in them, I would thus, reduce or pull back some unnecessary privileges given to the leaders like free air tickets for personal trips and establish a transparent accountability of the use of tax payers’ money. I would speed up all the work stuck in all the different departments and ministries as lethargy and sluggishness are the biggest impediments in India’s development.

Strict action would be taken against bribe seekers and givers. The infrastructure of all government offices would be improved. For the betterment and survival of the common man, prices of all necessary commodities like medicines, groceries, etc., would be reduced and malpractices like hoarding and black marketing would be discouraged.

Price rise would not be allowed to go beyond a certain level. More colleges and universities shall be set-up for higher education. The government would provide all aid to even the private universities to provide education at affordable fees. For farmers, easy and quick loan schemes would be floated in the market and they would be provided with subsidies for technologically advanced pesticides and fertilisers. Their produce will be bought by the government at a minimum support price to guard them against any losses.

Taxes shall be designed on progressive income levels that is higher the income, higher the tax to promote equal distribution of wealth. As a leader, I would take all steps to purge the system of corruption and favouritism and render my service with honesty.

English Essay
Tags: if I Were a National Leader