Hello Friend This is special category for our small reader who study in school. If they looking for english essay for their school homework or any kind of english essay article then this special category might help you all guys. in this article we will share Narendra Modi Essay in English for all class children and  student . Initially we have published 300 word and 1000 word article for Narendra Modi.

Essay on Narendra Modi in English 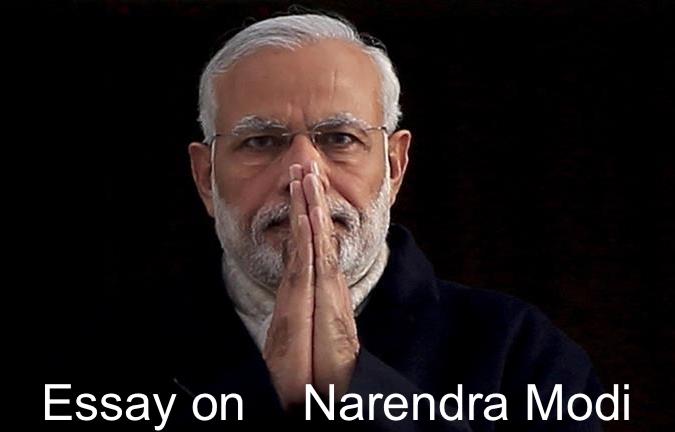 Narendra Damodardas Modi was born on September 17, 1955 in Vadnagar, a small village in Mehsana district of Gujarat. He was third of the six children of Damodardas and Hiraba Modi. His father was a tea stall owner and quite often Narendra would accompany his father to work. However, at 17, he made the exceptional decision of leaving home and travelling the country. His family was shock by the decision, but let him go. He travelled to the Himalayas, West Bengal and even the north-east.

Modi was married young but the marriage remained unconsummated. He kept the wedding a secret as he imbibed the spirit of selflessness, social responsibility, dedication and nationalism. In 1972, Modi became an RSS pracharak, dedicating his entire life to the organisation and service. He worked hard, waking up at 5a.m. and accomplishing difficult tasks late into the right. In 1973, he also got the opportunity to meet senior Jan Sangh members.

In1971, Indira Gandhi swept to power. However, the euphoria soon died away and dreams fizzled out owing to the rampant corruption. Amid all the discontent, Indira Gandhi in 1975  promulgated the Emergency. Democracy was under attack, freedom of the press was muzzled. Senior opposition leaders such as LK Advani, Atal Behari Vajpayee and thousands others were arrested.  Modi was at the core of the anti-Emergency movement.

He became the general secretary of the Gujarat Lok Sangharsh Samiti  and his primary role was to coordinate between activists in the state.  It is said that to avoid arrests and the Indira government’s ire, Modi began disguising himself-dressed as a Sikh one day, an elderly man another day.

After Emergency, the Indira Gandhi government was routed in the polls and the new Janata Party government ascended to power, At the same time, Modi was promoted to sambhaag pracharak, the equivalent of a regional organiser, and soon, he began travelling fa and wide, spreading the RSS word.  Even asheem braced politics, Modi graduated in political science from Delhi University and went on to do his Masters from Gujarat University. Modi won the admiration of seniors for his hard work and efficiency. In 1987-88, he was deputed to the BJP’s Gujarat unit as organising secretary, marking his formal launch in mainstream politics.

Recognised as a master strategist, Modi was trusted with the municipal elections in Ahmedabad. Taking on the challenge head- on, Modi began touring the entire state, campaigning and spreading the BJP’s word and worked tirelessly to ensure a victory. His result bore fruit when the party won the elections. With the assembly elections approaching in 1990, Modi was once again entrusted to repeat his previous performance. The BJP came a close second to the Janata Dal and after that the BJP emerged as a formidable force in the state.

It was in the late 1990s when Modi started to emerge as a key player when he became the general secretary of the party in Delhi. It was then that he was handed over the responsibility of carrying out national vatras. He was tasked with ensuring that L K Advani’s Somnath to Ayodhya yatra went off without any hitch.

The task was not easy, but Modi carried it off to perfection.  In 2001, Modi received his huge break as chief minister of Gujarat. Successful with his development model, he became theChief Minister of Gujarat for four successive terms. Finally here received a huge majority in Lok Sabha elections and sworn in as the 15th Prime Minister India on May 26, 2014,

After becoming the Prime Minister, Modi has embarked journey for he allround development of India. He has rebuilt for relations with almost all the countries of the world. He has S many ambitious programmes for the development of India, SUL ‘Prime Minister Jan Dhan Yojana, shramev jayate, Make in India and Swachch Bharat Mission. has rebuilt friendly . He has started e, Make in India,

Narendra Modi is a strict vegetarian and religious person. He works the whole day and sleeps only for four hours in a day. Since he became the Prime Minister he has not taken even one day of from his office. Truly he is a new ray of hope for India.

Narendra Modi is the new Prime Minister of India. He was born in a poor family on September 17, 1950 at Vadnagar in Mehsana district of then Bombay Presidency. He is the third of the six children born to a small tea seller, Damodardas Mulchand Modi and Heeraben.

During his childhood Narendra used to assist his father by selling tea at the railway station. At the same time he continued his studies and worked with RSS and BJP as well. He served the party at the grass-roots level and rose to become the General Secretary. He was elected the Chief Minister of Gujarat for three times consecutively.

He became the 15th Prime Minister of India on May 26, 2014. He is the live example of the fact that even a poor humble man can touch unimaginable heights by dint of his determination and hard work. He has been awarded the first-ever Philip Kotler Presidential Award for his “Outstanding Leadership”

Essay on Narendra Modi in English

Narendra Damodardas Modi is the 115th and current Prime Minister of India. Modi was born on 17 September 195० to a family of grocers from a backward Community of Gujarat (then Bombay state). His father’s name is Damodardas and mother’s name is Heeraben Moolchand Modi.

He helped his father sell tea at a  railway station and ran a tea stall in his teenage. He Completed his schooling in Vadnagar, where a teacher described him as being an average student, but a keen debater. His first exposure to politics was at the age of eight when he came in Contact with Lakshman rao Inamdar of Rashtriya Swayamsewak Sangh (RSS).

In RSS, he was known as balswayamsevak, the junior cadet.Modi’s parents arranged his marriage as a child, in keeping with the traditions of the Caste.

He Was engaged at the age of 13 to Jasodaben Chimanlal and + couple was married by the time he was 18. They spent very little  time together and Were Soon estranged as Modi left his home to purse life on his Own. In 1978, Modi graduated, and in 1983, he completed his master’s degree, in political science.

For the outstanding Capabilities displayed, he was given the charge of the akhil Bhartiya Vidyarthi Parishad or ABVP (the student wing of RSS), despite the fact that he had minimal training. Due to his education and inclination, he was nominated as a representative of Outs the BJP.

He became Chief Minister of Gujarat in October 2001. Narendra  Modi governed Gujarat for 13 years and has served longest in that position than anyone else till date. Under Modi’s leadership,  Gujarat became known for its development connected governance.

Gujarat’s growth model was not Centred on any one sector. All the three sectors namely-agriculture, industries and services, made equal and active Contribution towards the growth of the state. Modi also devoted special attention towards the healthcare and education sectors. But, inspite of all this, Modi, till date, is accused and criticised for his inability to handle the Communal riots in Gujarat in 2002.

For his oath- talking ceremony as Prime Minister, he invited the leaders of SAARC countries to strengthen the diplomatic ties and increase business with them. Since then, praises for him can be Card from every nook and corner of the country.

In a short span of time as PM Modi started showing his magic. The first remarkable more was giving the green signal to bullet train in Ta. Next was ‘Make in India’ campaign, to turn the Country into Global manufacturing hub, which is being highly appreciated by everyone. The most recent series of events include the launch of the Swachh Bharat Abhiyan‘ – a country wide campaign to clean up India,

He launched it especially on Gandhi Jayanti and asked people to take a pledge to remove dirt from the soil of the nation. The । following day, he made his first radio speech in order to reach out to tens of millions of Indians. In his address, he spoke on several issues like khadi, skill development, empowerment of village etc.

Narendra Modi is also an excellent and he has used his oratorical skills in strengthening and diplomatic ties with our neighbours and other foreign countries like the USA, Nepal, Bhutan etc.

Narendra Modi has a humble and simple background and is known for his simple lifestyle. He has a reputation of being a workaholic. Modi frequently refers to Pro-people, good governance’ formula to substantiate his claims on holistic development. Indian business leaders right from Ratan Tata to Mukesh Ambani, seem to be convinced with his ideologies and vision. Hence, Narendra Modi, unquestionably, Comes across as a very promising leader of the country. Evidence suggests that Gujarat has been able to position itself as a rewarding destination for investment under his guidance.