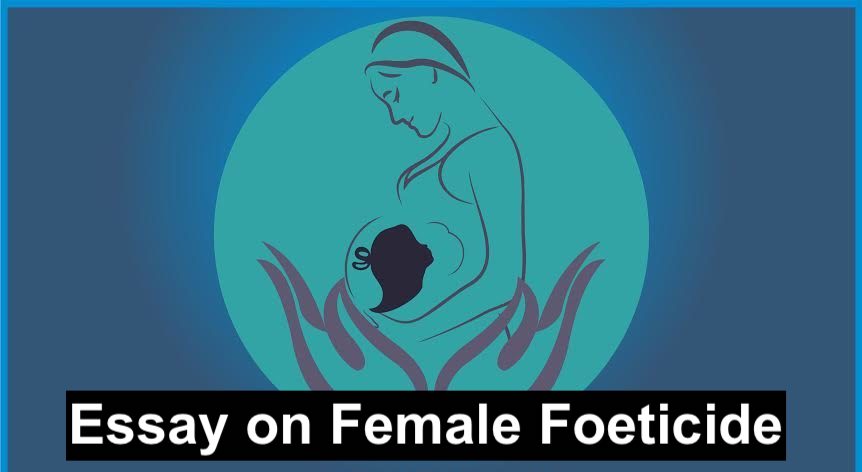 Essay on Female Foeticide in english

A Curse on Our Society india is a land where people worship a myriad of female deities in quest of wealth, wisdom and power. In this country, it is a Common sight to see thousands of couples making arduous journeys every year to shrines of SAVE GIRL CHILD Goddesses in order to be blessed with a child. But strangely enough, in this Country, a couple is said to be blessed only when it has a male child; for a girl is never considered a blessing in our society.

THINK a world Without Us… Her birth seems to cast a pall of gloom over the entire family. Her birth is not rejoiced, instead the entire family mourns. The girl child in India is treated right from her birth as an additional burden, an extra mouth to feed, a liability and another man’s property. The birth of a son is regarded as essential in Hinduism and many prayers, and lavish offerings are made in temples in the hope of having a male child.

The advancement in science and technology is now used for all the wrong reasons. Ultrasonography, the method of using ultrasound waves to determine flaws in the human body, is now used to find out the gender of the foetus inside the womb. Parents check the gender of the unborn child and abort the pregnancy if it is a girl. This has not only disturbed the sex-ratio of the country but has also created problems in the society.

Females not only face discrimination in our culture, but are even denied the right to be born! Like many societies around the world, society in India too is patriarchal in nature. A set hierarchical system prevails in all tiers of the social order. The fanatic obsession with the male sex, though. is one of a kind.

Right from the ancient scriptures, one finds instances where men are glowingly praised as the key to continue the family lineage. A woman is forced to undergo multiple pregnancies and (or) abortions, until she fulfils her lifelong goal of being-a breeding machine that produces male offspring as per the needs of the family. In Indian society, female foeticide has emerged as a burning social problem during the last few years. The Frequency of female foeticide is indirectly estimated from the observed high birth sex ratio- the ratio of boys to girls at birth. The natural ratio is assumed to be ideal around 103 to 107 and any number above it is considered as suggestive of female foeticide.

Despite many laws like Pre-Conception and Pre-natal Diagnostic Techniques (Regulation and Prevention of Misuse) (PCPNDT) Act of 2004 to deter and punish prenatal sex screening and female foeticide, the con cern continues to grow.

It is often decried that the male-dominated Indian culture is to be blamed for the declining sex ratio. The Hindu culture lays stress on the birth of a son as he would carry the lineage further. Moreover, only through cremation from his hands can bring moksha to the parents. In an agricultural based country like ours, more sons means more hands to work which would bring more money. The girl child is treated as a guest who would leave some day to join her husband’s house and the family would also have to pay dowry for her welfare and added to that, she would not take care of her parents but a son would.

A singular approach in tackling this malaise might not bring about the change that is required. We cannot hope that having laws would improve the situation some day. A multi-pronged strategy is required to stop the dwindling numbers of girls and correct the havoc brought about by years of systematic crime.

We actually need to educate people and create awareness about the ill-effects of such a shameful practice. Society must understand that girls are not a burden and are doing better than boys in various fields. It is high time that we give the girls of this nation their deserved place. In the end one can only say: “Save the girl child, female foeticide is a crime. Girls should have the right to live and prosper.