Hello Friend This is special category for our small reader who study in school. If they looking for english essay for their school homework or any kind of english essay article then this special category might help you all guyz. in this article we will share Jhansi Ki Rani Story in English for all classs children and  student . Initially we have published 300 word and 1000 word article for Jhansi Ki Rani Story. 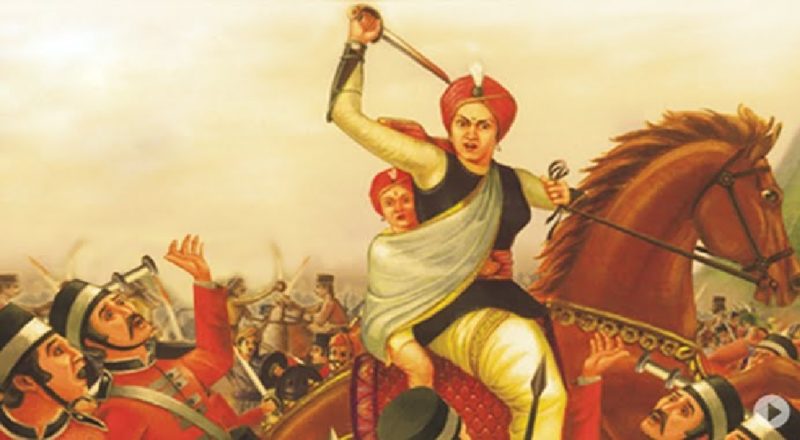 She was born not to play a subservient role to her male counterparts She was not the one to remain tied down to household activities oblivious of what was obtaining outsideIt was there fore not a matter of great surprise that she should plange into what was essentially per ceived to be in the domain of men. A woman fighting for the cause of the nation and taking up arms to defend motherland was unthink ableJhansi ki Rani, as Lakshmi Bai was popu- larly known, did exactly that.

It would not be an exaggeration to call her the greatest woman warrior of India, nor will it be improper to say that she was the first to have started real fight for liberating India from the clutches of the British Rule. She lived for the country and died fighting for the country. She has gone down in the history of India as one of the most illustrious individuals who sacrificed her life for the coun try and its people.

She was Manu (Mannikarnika) as a childBorn on 13th November, 1835 in the Brahmin fam ily of Moropanth and Bhagirathi, she showed her inclinations of being illustrious and courageous right from the very early stage of her life. At the age of four, she lost her mother and the respon sibility of grooming her fell on the shoulders of her father. While completing her education, she took special lessons on horse ridingsword fighting, shooting and other martial arts. This kept her bodily and mentally agilewhich was to serve her in good stead at the later stage of her life.

Early marriage was a tradition those days and Manu too was married off at an early ageShe was married to Raja Gangadhar Ramthe Ma haraja of Jhansi. Consequently, she became the queen, Jhansi ki Rani. A formal name of Lak- shmi Bai was bestowed on her. Her marriage was solemnised in a temple in the city of Jhansi.

She gave birth to a male child, who unfortunately died within four months of his birth. There was no further birth in the family. She adopted Damodar Rao as her son.

Having a heir for the throne was necessary those days as Lord Dal housie had promulgated a law called Doctrine of Lapsewhereby an Indian estate having no legal heir would merge into British Empire Gangadhar was not keeping well.

It was there fore, thought expedient to adopt a child and pro nounce him as the legal heir to the throne. But Lord Dalhousie didnotrecognise Damodar as the legal heir to the throne since the child was not their own. An adopted child cannot be conferred the right of being legal heir was his interpre tation of the lawDalhousie tried to annex the estate of Jhansi on this plea because Gangadhar had expired in the meantime Finding her alone and desolatehe thought he was going to have a cake-walk over her estate. Lakshmi Bai had no such intent of handing over her estate to the British on a platter.

In fact, Dalhousie was using this as a ploy to expand British Empire in India. Jhansi ki Rani was offered a life pension of 60,000 and was permitted to use the city palace When she was communicated the decision to annex her estateshe was reported to have re torted that she would not relinquish control of Jhansi. However, no resistance was actually ofered when the bid to take over was made. But this attempt to bulldoze occupation of Jhansi backfired because it hurt the sentiments of In. dians There were other reasons also for the dis enchantment of people The cow slaughter was banned in the estate. But with the takeover, British allowed this practice to resume.

This deeply hurt the sentiments of people. The British also refused to release money for the celebration of her son’s sacred thread ceremony. All these added to the discomfiture of the people as also to the personal discomfture of Lakshmi Bai. The people of Jhansi saw these moves as an insult to their queen.

This kind of humiliation heaped on her made her more resolute and determined to fight for her rights. She decided she was not going to yieldShe was going to defend Jhansi at all costs. She had become a symbol of patriotism and self respect. She strengthened the defence of Jhansi and cobbled up an army of the rebels to fight the English

.Women too were enlisted in the army and they were impartedextensive training in warfare. Some of the illustrious names that came to her support were Khuda Baksh, Ghulam Ghaus Khan, Moti Bai, Lala Bhau Baksh and sev eral others. They and many more drawn from both communities of Hindus and Muslims came under one umbrella of Lakshmi Bai top launch a blistering fight for the cause of their indepen- dence and to protect the dignity of their queen. But then there were a few traitors as well.

There was one Naya Khan and the other Dinkar Rao The British attacked her bastion in March 1858. Instead of surrendering to the British force, she chose to meet the challenge The fight continued for nearly two weeks. Though it was known that she should not be able to sustain her fight for long, yet she and her warriors did not surrender before the might of the British Em pireShe personally led the fight back and fought on bravely as long as she could.

The British army was amazed to see her speed and agility. But it was too good to last. The British army broke the defence and entered the city of Jhansi. When it became obvious that she was not going to hold out, she along with some of warriors left Jhansi and moved to Kalpi. Rebels from other places also joined her there Tatya Tope of Kalpi was also there From there she moved to Gwalior.

An other battle ensued and she fought on bravely as though she was possessed On the second day of the resumed fight, when she was barely twenty two, she achieved martyrdom 18th June 1858  was the day when she laid down her life for the cause Independence.

In a male-dominated soci etyLakshmi Bai, a woman of substanceshowed her mettle in the battlefield. She had no formal training of any kind except her sense of self-re spect, dignity and yet she took on the might of the British Empire and sowed the seeds of strug gle for India’s independence