Hello Friend This is special category for our small reader who study in school. If they looking for english essay for their school homework or any kind of english essay article then this special category might help you all guys. in this article we will share Teachers Day Essay in English for all class children and  student . Initially we have published 300 word and 1000 word article for Teachers Day. 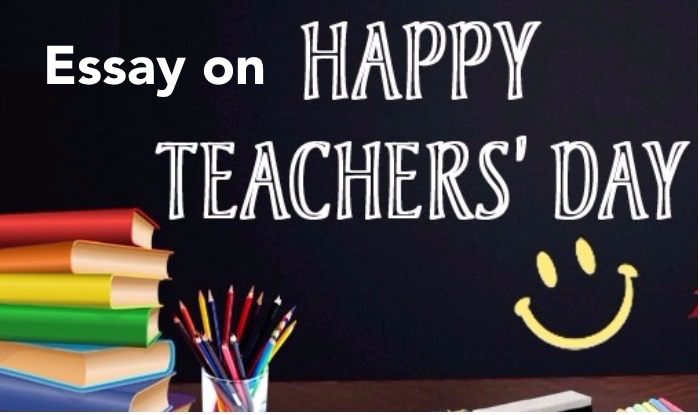 This day is celebrated as Teachers’ Day because on this day of 5th September in the year 1888 was born one of the greatest teachers of our times: Dr. Sarvepalli Radhakrishnan who went on to become the President of India in 1962. The day is celebrated to express our respect and gratitude to a person who brought so many laurels to the country By celebrating this day as Teachers’ Day India remembers one of its illustrious sons of all times.

By celebrating this day this same respect is extended to all teachers as they are all expected to impart those very values and standards that Dr. Radhakrishnan stood for. India celebrates its Teachers’ Day where students across the country participate in certain programmes that are exclusively meant for their teachers.

They make their teachers feel special as they bestow flowers and bouquets to them India has a tradition of holding teachers in high esteemThere are innumerable examples of how students or disciples of teachers have out of their way shown respect to their teachers. Eklavya had merely taken Dronacharya as his teacher and yet he did not hesitate to pay his fee when demanded by the teacher.

The teacher demanded his thumb and the taught gave it with out batting an eyelid. This simply shows the kind of esteem that can be shown to a teacher. This need not be emulated by others. A good teacher according to Dr. Radhakrishnan “must know how to arouse the interest of the pupil in the field of education for which he is responsible. He must himself be a master in the field of education and be in touch with the latest developments in the subject she must him self be a fellow traveller in the exciting pursuit of knowledge”.

He not only believed in what he said, he practised it himself. He did not have a great time in his young days. In fact, he came from a very poor family and making both ends meet was a difficult thing for himAfter doing his masters in philosophy, he took to teaching His wonderful and famous ways of teaching endeared him to one and all. Pupils began to flock to him and this smoothened his economic crisis. It was this style of teaching which made learn ing a lively exercise with him and it was this way of teaching that took him to places as a man of erudition Teachers, one fondly hopes, should be able to imbibe some of those qualities that Dr. Radhakrishnan was known for.

Speaking about Teachers’ Day is speaking about Dr. RadhakrishnanIt will be interesting to know that when Dr. Radhakrishnan was appointed Ambassador to the USSR in 1949, few had expected him to be able to deliver any thing positive. Most thought that his grounding in idealist philosophy would not stand him in good stead with Joseph Stalin, an ardent communist perceived by many as monstrous.

But the teacher in him took control of the situation even when face to face with Stalin. with the help of an interpreter, he told Stalin that he came from a country where an emperor renounced war after securing a bloody victory and went on to become a monkHe was obviously referring to Ashoka the Great.

He then added, wYou have waded your way to power through force. Who knows that might happen to you also?” Stalin smiled and said, “Yes miracles do happen” Stalin then revealed that he had spent five years in a theological seminaryThis meant he did not rule out the possibility of that miracle. Before leaving for India, Radhakrishnan paid Stalin a courtesy call.

Stalin was not keeping well, Dr. Radhakrishnan patted him on the cheek and on the back. Stalin said that he was the first person to have treated Stalin as a human being and not as a monster. Stalin was touched by this gesture of Dr. Radhakrishnan and felt sad that he was leaving He knew he was not going to live long but wished Dr. Radhakrishnan to live long. Stalin died within six monthsIt was this quality in him that endeared him to such a person as Stalin who was known for his ruthlessness It is the teacher who makes or unmakes a life A good teacher can transform the life of his/her pupils.

Even though we cannot have another Dr. Radhakrishnan in our midst, there is no dearth of quality teachers either in our society. For in- stance, Anand Kumar of Super 30 at Patna is an internationally-acclaimed teacher. His methods are creating waves and are making lives of so many pupils drawn from the lowest rung of society.

Year after year he has been shaping up the life and career of so many who would not have been able to see the light of the day on their own Likewise, there are others at different places of the country quietly shaping the life and career of so many and in the process are contributing to the nation-building There is no gainsaying the fact that teachers play a pivotal role in determining the destiny of a nation by imparting quality education to children.

Quality, however, should not remain restricted to the lessons for examinations but it should refer to those aspects that contribute to making of character. A nation, no matter how well endowed with technological skill and economic well-being cannot enrich itself if it did not have citizenry of character.

A teacher’s job is to build character as also to build society and nation by imparting quality education to his/ her pupils in the manner Dr. Radhakrishnan did.

We celebrate several days as national and international days to commemorate the memories of important persons and events, or to bring to light a lost cause or to give due importance to a particular section of society.

It is in this light that we have to study the celebration of Teacher’s Day. This day is celebrated every year on 5th September to commemorate the birth of Dr. Sarvepalli Radhakrishnan, who was born on 5 th September, 1888. | It is well-known that like Bertrand Russell and Dr. Zakir Hussain Dr. Radhakrishnan was a great educationist and like the latter, he became the President of India. Like the former, and may be, to a greater degree, he was a great philosopher. ।

As a philosopher, Dr. Radhakrishnan laid stress on recognition of the spirit. He focussed on the purpose of life, importance of means vis-a-vis ends and service to motherland and humanity at large. It is as an ideal teacher that most relevantly places Dr. Radhakrishnan to be a role-model before us whose birthday is fit to he celebrated as Teacher’s Day Simply to say that he was a great and dedicated teacher is not enough. That he inspired his students with his absorption in the duties allotted to him will also not be adequate to describe his greatness.

Dr. Radhakrishnan was a voracious reader and a bibliophile. He was a brilliant student who topped his B.A. and M.A. examinations. After completing his studies, he became an Assistant Professor of Philosophy in Madras Presidency College and later joined the University of Mysore and then moved to Calcutta University. Still later, he shifted toOxford, Cambridge and Harvard Universities. Later, he became the Vice-Chancellor of Andhra University. He was a great idealist and loved his students who in turn loved him immensely. Heal so represented India in the UNESCO as a renowned educationist. It is said that when he left a job at a particular place, a vast sea of students went to see him off at the railway station.

This clearly shows how much the students loved Dr. Radhakrishnan who led a life of simplicity and austerity without falling a prey to materialism which is now haunting our society like a ruthless monster.

All this detail was necessary to explain the importance of the day and the man who is behind it. But all these efforts become worth- while only if we get the necessary inspiration and urge for concrete action from the man concerned. It is not so necessary to highlight the importance of the role of the teacher in society. To say that the teacher is a nation-builder is only a cliche. The point is that every teacher should try to develop in him self the true qualities of an ideal teacher like Dr. Radhakrishnan. A teacher can be a nation-builder in the true sense only if he has the spirit of dedication in him and if he takes his job as a missionary of education. ।

Teachers’ Day is, in reality, a day for introspection for all, including the teachers, and not a day just for celebration. And if on this day, the teachers are offered greeting-cards, flowers, sweets, gifts and presents by their loving students, it is a token of love and respect, if these are offered in right spirit. There is no doubt that students are, by and large, innocent creatures and are only sometimes misled by political leaders and even their money-minded parents. All this has to be changed. Occasional parent-teacher meetings in schools augur well for all concerns.

It is good that on this day functions, seminars and workshops are held in schools and elsewhere and awards are presented to deserving and dedicated teachers on state and national levels. But one sometimes feels peeved to find teachers wearing black badges and celebrating the day as a “black day” when their demands are not met. It will be worthwhile if the government accepts their demands much earlier if they are found genuine.

Let us, as students, take an oath on this day that we shall pay full attention to our teachers and show due regard and respect to them. If we ourselves are teachers, let us resolve to work whole- heartedly with a spirit of dedication to teach, guide and train the future helmsmen of our country who have been given over to us by our nation in our custody to make them great leaders. Let us take real interest in removing darkness from this land by spreading light of literacy, knowledge and education.