Hello Friend This is another special category for all our small reader who study in school. If they looking for Short Stories for Kids in English then this type of category will help you for sure.  in this article we will share Short Stories with Moral in English for all class children and  student . if you like our story then please don’t forget to share with your friend and family so that everyone know about my webiste.

Short Stories for Kids No.1 : A POND FULL OF MILK 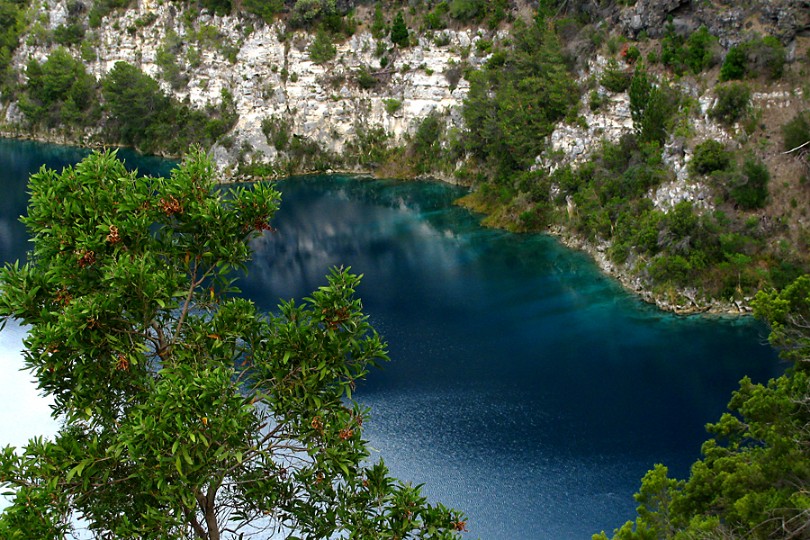 Once there was a king who told some of his workers to dig a pond. Once the pond was dug, the king made an announcement to his people saying that one person from each household has to bring a glass of milk during the night and pour it into the pond. So, the pond should be full of milk by the morning. After receiving the order, everyone went home.

One man prepared to take the milk during the night. He thought that since everyone will bring milk, he could just hide a glass of water and pour inside the pond. Because it will be dark at night, no one will notice. So he quickly went and poured the water in the pond and came back. In the morning, the king came to visit the pond and to his surprise the pond was only filled with water! What has happened is that everyone was thinking like the other man that “I don’t have to put the milk, someone else will do it.”

Short Stories for Kids No.2: DON’T CHANGE THE WORLD 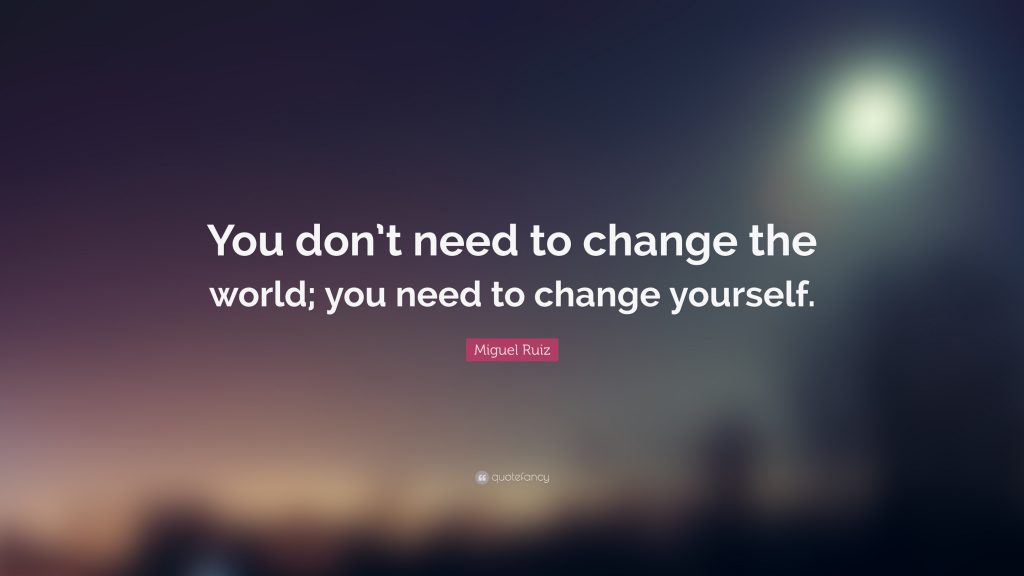 Once upon a time, there was a king who ruled a prosperous country. One day, he went for a trip to some distant areas of his country. When he was back to his palace, he complained that his feet were very painful, because it was the first time that he went for such a long trip, and the road that he went through was very rough and stony. He then ordered his people to cover every road of the entire country with leather.

Definitely, this would need thousands of cows’ skin, and would cost a huge amount of money.

Then one of his wise servants dared himself to tell the king, “Why do you have to spend that unnecessary amount of money? Why don’t you just cut a little piece of leather to cover your feet?”

The king was surprised, but he later agreed to his suggestion, to make a “shoe” for himself.

There is actually a valuable lesson of life in this story: to make this world a happy place to live, you better change yourself – your heart; and not the world.

Short Stories for Kids No.3 THE TRAVELERS AND THE PLANE TREE

Two men were walking along one summer day. Soon it became too hot to go any further and, seeing a large plane tree nearby, they threw themselves on the ground to rest in its shade.

Gazing up into the branches one man said to the other: “What a useless tree this is. It does not have fruit or nuts that we can eat and we cannot even use its wood for anything.”

“Don’t be so ungrateful,” rustled the tree in reply. “I am being extremely useful to you at this very moment, shielding you from the hot sun. And you call me a good-for-nothing!”

All of God’s creations have a good purpose. Islam teaches us that we should never belittle Allah’s blessings.

Short Stories for Kids No.4 LEARN FROM MISTAKES

Thomas Edison tried two thousand different materials in search of a filament for the light bulb. When none worked satisfactorily, his assistant complained, “All our work is in vain. We have learned nothing.”

Edison replied very confidently, “Oh, we have come a long way and we have learned a lot. We now know that there are two thousand elements which we cannot use to make a good light bulb.”

Short Stories for Kids No.5 THE BOY WHO CRIED ‘WOLF’

Once there was a shepherd boy who had to look after a flock of sheep. One day, he felt bored and decided to play a trick on the villagers. He shouted, “Help! Wolf! Wolf!”

The villagers heard his cries and rushed out of the village to help the shepherd boy. When they reached him, they asked, “Where is the wolf?”

The shepherd boy laughed loudly, “Ha, Ha, Ha! I fooled all of you. I was only playing a trick on you.”

Again he cried, “Help! Help! Wolf! Wolf!” Again, the villagers rushed up the hill to help him and again they found that boy had tricked them. They were very angry with him for being so naughty.

Then, some time later, a wolf went into the field. The wolf attacked one sheep, and then another and another. The shepherd boy ran towards the village shouting, “Help! Help! Wolf! Help! Somebody!”

The villagers heard his cries but they laughed because they thought it was another trick. The boy ran to the nearest villager and said, “A wolf is attacking the sheep. I lied before, but this time it is true!”

Finally, the villagers went to look. It was true. They could see the wolf running away and many dead sheep lying on the grass.

We may not believe someone who often tells lies, even when he tells the truth.

Short Stories for Kids No.6 THE FARMER AND THE STORK

Finding that cranes were destroying his newly sown corn, a farmer one evening set a net in his field to catch the destructive birds. When he went to examine the net next morning he found a number of cranes and also a stork.

“Release me, I beseech you,” cried the stork, “for I have eaten none of your corn, nor have I done you any harm. I am a poor innocent stork, as you may see – a most dutiful bird, I honor my father and mother. I…”

But the farmer cut him short. “All this may be true enough, I dare say, but I have caught you with those were destroying my crops, and you must suffer with the company in which you are found.”

People are judged by the company they keep.

Short Stories for Kids No.7 THE HARE AND THE TORTOISE

A tortoise one day met a hare who made fun of her. “My, my, you move so slowly, you will never get far!”

The tortoises, upset by the hare’s manner, said, “Let’s have a race and see who is faster.”

The hare laughed and said, “You must be joking! But all right, we’ll see who reaches the other side of the hill first.” Off he ran, leaving the tortoise far behind.

After a while, the hare stopped to wait for the tortoise to come long. He waited and waited till he felt sleepy. “I might as well take a nap,” he thought. “Even if she catches up with me, I can easily win the race.” So he lay down under a shady tree and closed his eyes.

When the tortoise passed the sleeping hare, she walked on slowly but steadily. By the time the hare woke up, the tortoise was near the finishing line. He ran as fast as he could, but he could not catch up with the tortoise.

Slow and steady can win the race.

Short Stories for Kids No.8 THE ANT AND THE DOVE

One hot day, an ant was searching for some water. After walking around for some time, she came to a spring.

To reach the spring, she had to climb up a blade of grass. While making her way up, she slipped and fell into the water.

She could have drowned if a dove up a nearby tree had not seen her. Seeing that the ant was in trouble, the dove quickly plucked off a leaf and dropped it into the water near the struggling ant. The ant moved towards the leaf and climbed up there. Soon it carried her safely to dry ground.

Just at that time, a hunter nearby was throwing out his net towards the dove, hoping to trap it.

Guessing what he was about to do, the ant quickly bit him on the heel. Feeling the pain, the hunter dropped his net. The dove was quick to fly away to safety.

One good turn deserves another.

Short Stories for Kids No.9 THE MONKEY AND THE DOLPHIN

One day long ago, some sailors set out to sea in their sailing ship. One of them brought his pet monkey along for the long journey.

When they were far out at sea, a terrible storm overturned their ship. Everyone fell into the sea, and the monkey was sure that he would drown. Suddenly a dolphin appeared and picked him up.

They soon reached the island and the monkey came down from the dolphin’s back. The dolphin asked the monkey, “Do you know this place?”

The monkey replied, “Yes, I do. In fact, the king of the island is my best friend. Do you know that I am actually a prince?”

Knowing that no one lived on the island, the dolphin said, “Well, well, so you are a prince! Now you can be a king!”

The monkey asked, “How can I be a king?”

As the dolphin started swimming away, he answered, “That is easy. As you are the only creature on this island, you will naturally be the king!”

Those who lie and boast may end up in trouble.

Short Stories for Kids No.10:  THE FOX AND THE STORK

A selfish fox once invited a stork to dinner at his home in a hollow tree. That evening, the stork flew to the fox’s home and knocked on the door with her long beak. The fox opened the door and said, “Please come in and share my food.”

The stork was invited to sit down at the table. She was very hungry and the food smelled delicious! The fox served soup in shallow bowls and he licked up all his soup very quickly. However, the stork could not have any of it as the bowl was too shallow for her long beak. The poor stork just smiled politely and stayed hungry.

The selfish fox asked, “Stork, why haven’t you taken your soup? Don’t you like it?”

The stork replied, “It was very kind of you to invite me for dinner. Tomorrow evening, please join me for dinner at my home.”

The next day, when the fox arrived at the stork’s home, he saw that they were also having soup for dinner. This time the soup was served in tall jugs. The stork drank the soup easily but the fox could not reach inside the tall jug. This time it was his turn to go hungry.

A selfish act can backfire on you. 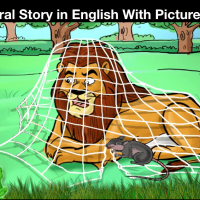 Moral Story in English With Pictures For Kids and Parents 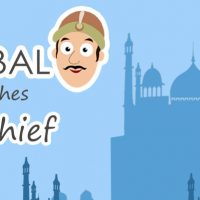 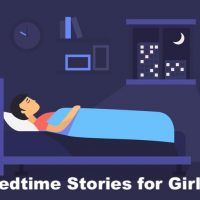 Long and Short Bedtime Stories for Girls and Girlfriend With Picture 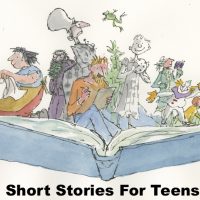